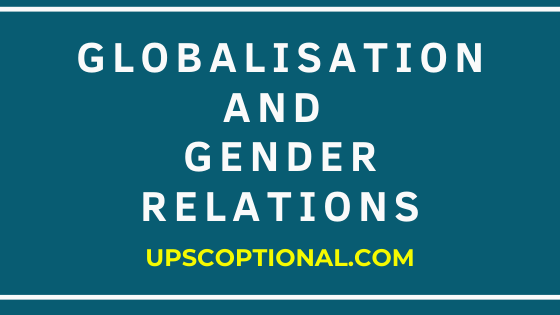 Answer – When we talk about globalisation, it is imperative to find out its relations with gender issues as such issues are important for overall impact of globalisation. In the service sector the increased participation of women all over the world has raised hopes that globalisation would bring some better results for them.

Women have become central to current production systems. Another extremely important aspect of gender and globalisation is the migratory tendencies of women. On the earlier occasions mostly the males had migrated internationally. However, there has been considerable increase in the number of migratory women. Another area of concern is the plight of rural women who have been responsible for ensuring the conservation of biological diversity and other natural resources.

In order to ensure sustainable development through globalisation, women issues have to be dealt with seriously and sincerely. Women are also associated in sizeable number with informal sector itself changing as a result of either its integration within or marginalisation by transnationalised production system.

So far as trade is concerned, the area has also been supported by women. Whether it is import or export, women are found to be associated at every level with the process. Similarly, in the arena of social reproduction again, women are critically associated with education, maternal and child care, environment protection and conservation of resources. The rapid increase of globalisation has made women extremely vulnerable on many fronts as the process of globalisation has also given rise to religious fundamentalism and has caused its spread. It has also helped cross national and ethnic conflicts spread their wings putting women at the receiving end.

Further, even at domestic front, large scale disparity has been noticed among men and women. The declining sex ratio in a number of developing countries have been causing concerns for the respective governments. The present phase of globalisation is facing a challenge from the question as to how much humanisation can be done in market driven economy. Further, what are the steps that should be taken by the governments for safeguarding the rights and privileges of women particularly when the entire globe is striving to cope with the changes in globalised economy.