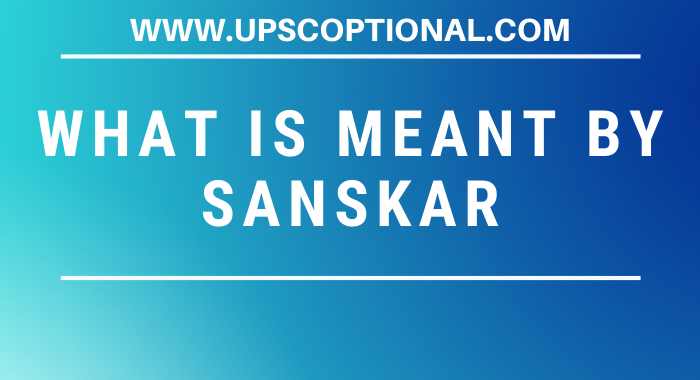 What is meant by Sanskars ? Describe the aim and main types of Hindu Sanskars.

Meaning of Sanskars :- Sanskaras means to purify. According to Manu, Sanskars purify the body. Starting with Garbhadhana they end with Anthyeshti. Every Sanskara starts with a ‘home’ or ‘yajna’. Opinions differ in regard to their number. Whereas Gautama, dharma sutra detail some 48 Sanskaras most Grahsutras put their number at 10. Some of the more important Sanskaras are – Garbhadhana, Punsavana, Jatakarma, Namkarana, Upanayana, Samavartana, Vivaha, Antyesthi.

These sanskaras have a great importance from the viewpoint of ethics. According to Valvalkar, the whole system of sanskara points out that some new responsibilities are being put in man for social and individual good and it is his major duty to respect them. Marriage and other sanskaras are not only for individual good, they also represent his responsibility to society. Thus the balance and harmony of individual and society is maintained and progress happens.

In this way, the Hindu ethics maintains a proper balance between the individual and the social good, good of this life and the next, means and end, rights and duty or it would be even better to put it this way, in an integrated approach to life all these combine naturally and exist as mutual complements.