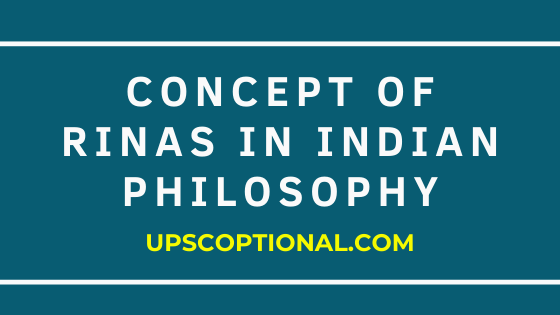 Write a short note on the concept of Rinas in Hindu thought [ Indian Philosophy ].

The Indian social organisation paid attention to the idea of Rinas along with the four ashrama and purusharthas. Four Rinas have been enumerated in the Shatpath Brahmana –

Rina to parents is the highest because they look after person in his infancy, suffering much pain themselves in the process. According to the Indian commentators the way of paying parental debt is to have children oneself and look after them in the same way .

Besides the parents, the seers and teachers impart knowledge to a person and make him capable of doing all work efficiently in the world. As for the repayment of this debt the means are to study the Vedas and to obey the laws of the Brahmacharya Ashram. The debt to gods is paid off by performing different yajanas. A person owns these Rinas the moment he is born and he cannot hope for liberation unless he clears the debt. The idea of Rinas conveys the lesson of unselfish fulfilment of duty and responsibility to man.