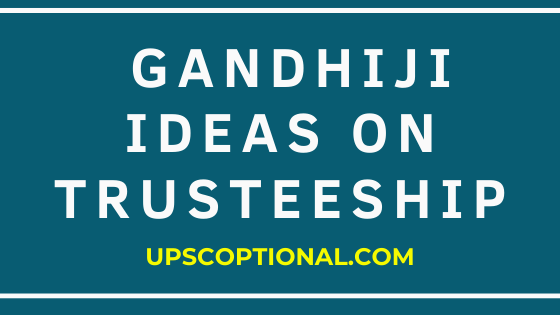 Write a short note on Gandhiji ideas on Trusteeship.

Answer – Gandhiji recognized society on the basis of truth, non – violence and love. He opposed communistic system because of violence. In any circumstances Gandhiji was against the use of force. He never thought of adopting violence to achieve his objectives. Observing the conflict between capital and labour, he did not imagine abhout class conflict.

He had faith in human soul unity. He thought that landlords and capitalists can have the change of heart. Farmers and labourers do not need use of force for fighting own rights as he did not accept the compulsion of class conflict.

Gandhiji had faith that landlords and industrialists having monopoly over land or industries can be forced to treat justly to farmers and labourers through non violence.

The present problems in economic field has the main cause in accumulation of wealth and extra riches in one hand. Without eradicating the capitalist to make best use of capital and the earning of capital by main means the labour class be satisfied, Gandhiji formulated the rule of trusteeship.

Gandhiji is of the opinion that till farmers and labourers do not know their strength then landlords and capitalists take away their rights. If farmers declare that they will not work till their basic needs are not fulfilled, landlord will be compelled thus. The same fact is applicable to labour class. While Marx instigates the proletariat to destroy the capitalists and their belongings, Gandhiji advises them to non violent , non-cooperation.

To solve this problem Gandhiji considers to give responsibility and special offices to capitalists. Gandhiji asks the capitalist class to act as guardians of the society and labourers by whose labour they produce and earn more wealth. This trusteeship or guardianship will have the benefit in this that they will not take themselves as owners but trustees of that capital, means and the labourers and function so as to their every interest and needs. They will make the best use of capital as they are responsible to upkeep of the capital themselves.

Trusteeship and its Meaning :-

Trusteeship means to give something under the trust of someone. Gandhism meant by trusteeship the keeping of extra wealth under someone’s trust. This includes equality. Gandhiji means that a lawyer and a sweeper should get equal amount. But he doubts on such possibilities. His principle of trusteeship includes that whatever is saved after fulfilling the proper needs should be kept as trustee in the hands of the rich class. They should take themselves as the servant of the society, should earn for the society and spend for the welfare of the society.

If individual comprising society, earns for the social welfare, there will be no problem of class struggle.

Gandhiji accepts that rich class may earn honestly crores but the objective should be that the earned income is handed over to society’s needs. This is the basic sense of the principle of trusteeship that whatever wealth is with the capitalist, it is as a trust of society hence capitalist should use it not for one’s own profit or luxury. He is a trustee and not owner.

Trusteeship and its Nature :- Gandhiji speaks of individuals unsuccess. He speaks that intellectuals should earn more. To say equal earning is to block the most able individual’s blocking the efficiency hence it is not proper.

But the more earned income of his should be used for social benefit. As happens in joint family system that income of all earners gather in one hand and all get to their needs. In the same way, more money left than the needed will be safe for the common use.

Gandhiji did not favour the eradication of kings and landlords by social revolution. He thought that whatever property has come to anyone from inheritance or business, he should think it not one’s own but of the nation. They should lead their living like a common citizen.

As labourers have right to their labour, the same kind of right must go to the owner over his capital but has less right. Such trustees are rarely seen. But if principle is correct, it is secondary that what number follow or will follow it.

Gandhiji replies to those who take the principle of trusteeship as imaginary that it is imaginary till we see it in words or principle. This principle cannot be practically explained fully developed as per him but if it is applied in practice it will be a success. This principle will be most useful and peaceful way of establishing equality in the world.

If the state attempts to eradicate the capitalism by force, it will be a prey to violence and will not be able to establish any society based on non violence. If once applied the state will take will take to it more often to put down their opponents.

He thinks that private ownership and capitalists violence is not so much tolerant than the violence of the state. But how the money accumulated by the trustee can be used. Should it be distributed to poor. He may spend in meals.

It should be used for public welfare which includes the followings :

Gandhiji was against nationalization of property. He favours fully individual freedom. Only in extraordinary circumstances nationalization can be accepted. Hence he puts – “ Capital as such is not an evil, its wrong use that is evil.”

Critical Evaluation : – Capitalists cannot change their sentiments by making them trustees. No capitalist has used his wealth for others by volition and individual rights are not forsaken. This principle accepts the individual ownership. It accepts the indirect existence of classes. Competition will grow due to earning profit as capitalists have rights over the means of production.

The principle is told as alternative to capitalist and socialism but it includes both. There is no less exploitation of capitalists as the position of labour class is worst in those firms following trusteeship. The absolute authorities as trustee do more exploitation than capitalists.