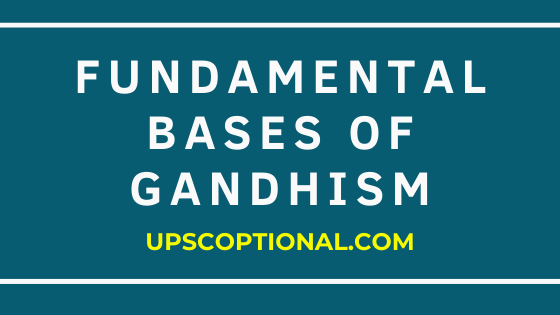 Describe the fundamental bases of Gandhism.

“Gandhism was a new phenomenon in Indian politics.” Discuss

Answer – An omnipresent reality : The fundamental base of Gandhism is the conception for an omnipresent spiritual reality which can be called God or simply Truth. Gandhiji had immense and deep faith in God as truth. God he said is a “self-existence, all knowing living force which inheres every other force known to the world. He is both immanent and transcendent. The supreme absolute ever present spirit of God is the starting point of Gandhian Thought.

He regarded it supreme reality and the supreme good. He said, “I cannot recall a single a single instance when at the eleventh hour God has failed me.” Gandhiji was thus a metaphysical idealist.

The individual conceived in moral and spiritual terms is the supreme consideration of Gandhian political thought. Gandhi wanted to bring about a psychological regeneration of man. He believed that there was some thing inherently divine in man’s nature. But the existing man is also imperfect. He is far from God. Hence the present man should be raised to his higher ideal self.

He was optimistic and was never despaired of man’s emancipation. He advocated a moral change of human heart. He even believed that the heart of the enemy can also be won over. He always appealed to the element of divinity in man. He felt that a disciplined individual can do a lot in reforming the institutions of which he  was a member.

He always laid stress on the moral and spiritual side rather than on the intellectual and scientific side of man’s nature. As such he laid emphasis on the performance of one’s own duties without meddling with the duties of other’s.

That is what the concept of  “SVADHARMA AND SWADESHI” teach.

Thus he constantly laid stress on the necessity for the moral and spiritual uplift of man. He was opposed to all those thinkers who believed that human beings can be reformed by objective forces. According to him social betterment depends upon individual efforts for self-purification.

Thus the revelation of moral powers of the individual is an important point in the political thought of Gandhiji. That is why that spiritual realization and social service are integrally connected in Gandhian thought. There is no antithesis between social service and self-development.

To quote Gandhiji “Man is higher than the brute and has divine mission to fulfil. To find truth completely is to realize oneself and one’s destiny.”

“As compared to the primitive tribes there has been improvement in human nature. Gandhiji accepted that man can change his temperament and can control it by a process of prolonged purification ( Tapasya ). It is possible to remake human nature.