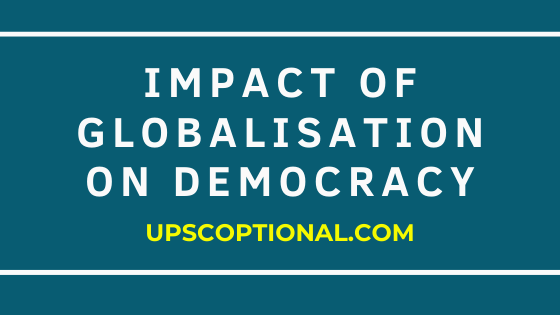 Write a brief note on Impact of Globalisation on Democracy.

Answer – It has been argued that a profound challenge is posed by globalisation on democracy. The end of the Cold War has witnessed a global situation in which democracy has been liberalised. In other words, even the countries which did not believe in the democratic set up have been passing through a transition from an undemocratic to democratic political system. Some of them have already democratised themselves. This fact suggests that democracy is gaining ground at international level.

However with the disappearance of borders due to globalisation, their sovereignty is under threat of diverse origin. It may be a political or military threat or even a threat from narcotics trade and smuggling. Democratic system, as we knew, survives in territorial states. However, it is being eroded by globalisation, hence one can argue that it poses a threat on democracy.

On the other hand, a few democratic countries have been witnessing the strengthening of the process of localisation. The term ‘localisation’ here means that more and more people are getting involved in the decision making process and the political system is confined to local authorities so far as the observance of the policy of self absorption is concerned. This signifies that in these countries democracy is widening its base.

In reality, the issue of globalisation and democracy is a matter of debate and an intricate one. The implementation of various programmes relating to globalisation is spearheaded by the WTO. Ironically, the WTO has been very often criticised for being undemocratic. It has earned the dubious distinction of being a ‘rich man’s club’. The moot point at the moment is, however, how to democratise WTO. On one hand, globalisation raises economic growth, spreads new technologies and increases the living standards, it affects the territorial identity of a country, thereby affecting its democratic process.

It is therefore urgently required that the governments should support a democratic approach to trade that must take into account the views of the developing countries with democratic political system. According to several scholars, the industrialised democracies are still the driving force, but they are no longer a sufficient group of countries neither to tackle the old and new trade challenges nor to change the WTO to function as a more democratic institution. Hence, developing democracies should pay more vital role in the number and population size.

To conclude, globalisation can be said to be a double edged sword which has to be handled with due care in order to take the fullest advantage as well as to safeguard the sovereignty of a state.