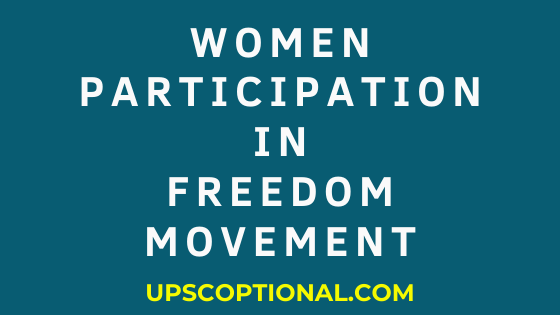 Examine in brief Women’s Participation in the Freedom Movement.

Ans – In 1885, the Indian National Congress was founded. In its 1889 Bombay Session, ten women participated.

Gandhiji’s call to women and large scale participation of women in the freedom movement brought about changes in the perception of nationalist leaders.

Mahatma Gandhi played the most significant role in involving large number of women in the nationalist movement.

He proclaimed : “ Women is the companion of man gifted with equal mental capacities. She has the right to participate in the minutest details of activities of men and she has the same right to freedom and liberty as he. By sheer force of vicious custom, even the most ignorant and worthless men have been enjoying a superiority over women which they do not deserve and ought not to have.”

He said “ I am uncompromising in the matter of women’s rights.”

He stressed that participation of women in the freedom struggle was an integral part of women’s dharma ( duty ). He felt that women were most suited for Satyagraha ( protest ) as they have qualities suited for non – violence struggle and for constructive social uplift programmes of the Congress. He said women had great qualities for self – sacrifice and tolerance and an ability to endure suffering which were needed for non violent struggle.

Jawaharlal Nehru was influenced by the Western suffragettes and was exposed to liberal views on women’s question in the West. He believed that without economic freedom other aspects of women’s equality would not be realised.’

He said that “if women’s struggles remained isolated from the general political, economic and social struggles, the women’s movement would not gain strength and will remain confined to the upper classes.”

Equality between men and women was accepted as one of the objectives in the Fundamental Rights Resolution of the Indian National Congress in 1931.

The Women’s India Association ( WIA ) was formed in 1917 by Margaret Cousin and Irish and an Indian nationalist, the National Council of Indian Women ( NCIW ) in 1926 and All India Women’s Conference ( AIWC ) in 1927. Jyoti Singh in Gujarat ( 1934 ) played an active role.

For the first time in 1917, the demand for women’s right to vote was raised. A deputation of women including Sarojini Naidu and Margaret Cousins met the Viceroy to put forward the demand for female franchise.

The Indian National Congress supported the idea and the constitutional reforms in 1919 allowed provincial legislatures to decide the issue.

Question of Participation in the Freedom Movement : –

Despite women’s active participation in the freedom movement and demand for voting rights, when the civil disobedience movement began in 1930 some of the women leaders took a position that women’s organisations should keep away from party politics as women were concerned with social issues and British Government’s help was necessary to bring about social change in women’s position through education and legislation.

There were other women leaders, however, who believed that they should align themselves with the national movement. They believed that sitting on the fence served no purpose and women will progress only with political emancipation.

In the 1920s and 1930s, women participated actively in the Civil Disobedience Movement. Women were more active in Swadeshi Movement ( campaign to wear homespun Khadi ) and picketing of shops selling foreign goods and liquor.

Forms of Women’s Participation in the Freedom Movement : –

Women all over the country provided food and shelter for underground political activists, carried messages to political prisoners. In 1930, women in large number participated in Salt March ( Gandhiji urged people to break the salt law by making salt themselves). Thousands of women were jailed.