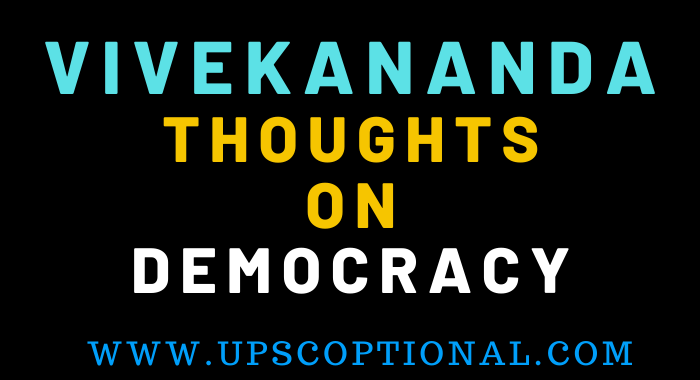 Vivekananda’s plea for the individual initiative and social equality made him a firm believer in the institutions of democracy. The liberation of the masses, involved in the concept of social equality, necessitates their participation in the activities of the government. He came to believe that some form of the government by the people is in the offing and pointed out with certainty that the future belongs to the masses, Shudras.

Thus he identified the Shudras rule with democracy. By Shrudras rule, he certainly meant the rule of the masses and not the rule of a particular section of the society. And by democracy, he meant not representative or indirect democracy, as it is current today. It was the man-making process; it inculcates faith in self reliance and self government. It brings out the latent abilities of the individual into full play to shoulder the responsibilities of government.

In other words, it makes the individual ethical, social and spiritual. But the man-making process is only to Vivekananda, and the end is the realisation of the ideal of Brahmin which is the embodiment of self restraint, renunciation and selfless activity.

The cyclical caste rule provided the theory of forms of government, namely the Brahmin, the Kshatriya, Vaishya and Shudra. He was of the view that forms of government were evolutionary, and not based on individual whims and fancies. He praised the Brahmin rule for its accumulation of spiritual lore, the Kshatriya for promoting science and civilization and the Vaishyas for forging international contacts.

He pointed out that everything goes to show that some form of rule by the people, call it what you will is coming on the board. He was an ardent defender of democracy because he was against the rule of one or the few. He strongly believed that the new order of things is for the rule of one or the few. He made it clear that in all forms of government that ultimate source of power is always the subject masses. The government of the people and by the people, could provide an opportunity for them to uplift themselves and mould their future.

He believed that democracy encouraged individual initiative and self reliance in administering the affairs of the government. From this standpoint, he criticised the party system which is thought necessary today for forming the government. The philosophy of Vedanta, of which Vivekanada was a votary, is inconsistent with the present party system. Hence, to avert the evil effects of representative democracy and to strengthen, he laid emphasis on the man making process through education – sacred and secular.