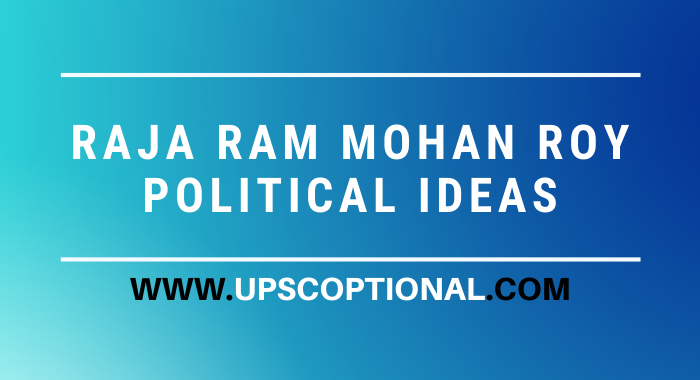 According to Miss Collet, “ Before the name of Raja Ram Mohan Roy’s public activities in Calcutta, there was no glimmering of a political life in the country. People had no conception of their civil rights and privileges of the people and in the name of the nation to speak to the government of their duties and responsibilities as the sovereign power.”

Raja Ram Mohan Roy was the first to enunciate the rights and privileges of the people and in the name of the nation to speak to the government of their duties and responsibilities as the sovereign power.

He was a realistic thinker and had liberal attitude towards every problem of life. According to S N Banerjee, “ Raja Ram Mohan Roy had a critical mind, a massive intellect and he was a religious Encyclopaedist. To the science of theology he bought a rationalist outlook and a noble and elevated personal stamp.”

B B Majumdar says that Roy was by his culture and temperament essentially a philosopher. He left no aspect of human life untouched. In Arabic and Persian, Roy had got for himself the title of Zaburdust Maulvi’. He had also acquired perfect mastery over Hebrew and Greek.

Like Aristotle and Machieavelli, Roy followed the inductive and historical methods and like them was interested in practical political problems rather than in general theories. Raja Ram Mohan was a prolific writer. His political ideas are to be found mainly in his following writings : –

Raja Ram Mohan Roy was a realistic thinker and had liberal attitude towards every problem of life. In the beginning, Roy had a feeling of great aversion to the establishment of the British rule in India but contact with Europeans made him revise this idea. He gave up his prejudices against Europeans and became inclined to their favour, feeling persuaded that their rule “ though a foreign yoke , would lead more speedily and surely to the amelioration of the Indian people.”

He also enjoyed the confidence of several of them even in their public capacity. In this way, he was a blessing in disguise. No doubt Roy was an admirer of the British rule in India for the advancement of India. He appreciated and admired the British rule for introducing progressive measures on political and social reforms.

According to Roy, the British rule was a blessing in disguise. No doubt Roy was an admirer of the British Rule in India and wanted to continue for centuries to come, bute he never hesitated to criticize the wrong policies of the government. Raja Ram Mohan Roy demanded that Indians should be given more share in administration of the country.

R B Majumdar says that Roy’s interest in politics sprang from his love of liberty. According to Bipin Chandra Pal, “ Ram Mohan Roy was the first to deliver the message of political freedom to India. His outstanding contribution towards the political advancement of his people was the new self-consciousness and self-confidence that he tried to create in his countrymen by multifarious works – theological, social, educational and juridical.

Roy was the most unhesitant advocate of religious toleration and spiritual individuality. Thus in his “Tract on Religious Toleration” he says, “ We should feel no reluctance to cooperate with them ( the Christians ) in religious matters, merely because they consider Jesus Christ as the messenger of God and their spiritual teacher, for oneness in the object of the religious practice should produce attachment between the worshipers.”

Raja Ram Mohan Roy was always a staunch lover of liberty. In a letter to J S Buckingham, the editor of the Calcutta Journal, written on August 11, 1821, Ram Mohan expressed his belief in the eventual restoration of the liberty of the European nations and Asiatic colonies. He sympathized with the demand of the Greek for liberty. When in 1821, autocracy was restored in Naples, Roy felt perturbed. He wrote, cancelling an engagement with Buckingham on 11th August 1821, “ I consider the cause of the Greeks as my own and their enemies as ours.  Enemies of liberty and friends of despotism have never been and never will be ultimately successful.”

In 1821, when Ram Mohan heard the news of the establishment of a constitutional government in Spain, he gave a dinner at Town Hall in Calcutta to celebrate the occasion. Miss Collet, the editor of the life and letters of Raja Ram Mohan Roy also tells us how, “at Cape Colony on his way to England the sight of tricolor flag on two French ships lying at anchor in Table Bay fired his enthusiasm.” As in the spiritual world he stood up as the prophet of universal religion, so in the spheres of politics, he wanted to see the triumph of the principles of liberation every where in the world.”