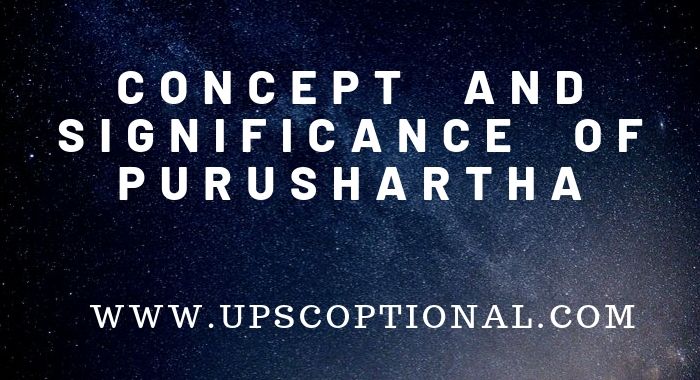 Explain the concept of Purushartha and examine its relevance in the modern social concept.

What is Purushartha ? Show its significance in life.

Define Purushartha. What are the four Purusharthas ? Discuss in brief the inner – relationship.

Answer – “ One of the main concepts which underlines the Hindu attitude to life and daily conduct is that of the four ends of man ( Purusharthas ). The first of these is characterised by considerations of righteousness, duty and virtue. This is called Dharma. There are two other activities, however, through which a man seeks to gain something for himself or pursue his own pleasure. When the object of this activity is some material gain, it is called Artha; when it is love or pleasure, it is Karma, finally there is the renunciation of all these activities in order to devote oneself to religious or spiritual activities with the aim of liberating oneself from the worldly life : this is Moksha.”

The doctrine of Purushartha is the basic principle of Indian ethical system.There are four Purusharthas which are to be attained by a man in this world.

These are : Dharma, Artha, Kama and Moksha.”

Dharma relates to the application of laws that are the basis of life and society. Kama relates to attainment of pleasure and it is a natural tendency. Wealth or Artha is the means of fulfilling all the desires of man in this world.

In Ramayana Valmiki writes, “In this world virtue, material gain and pleasure are all to be found in the fruit accruing from the pursuit of virtue.”

From Dharma issue profit and pleasure, one attains everything by Dharma. It is Dharma ehich is the essence and strength of the world.” According to Vaisesika philosophy, Dharma leads to improvement in this world and to Moksha in the next world.

Sometimes trivarga was interpreted as means to Moksha by the Hindus but emphasis on all the Purusharthas is laid.

“A man in hundred years of age should gain knowledge is childhood, sex satisfaction in youth and attend to duty and Moksha in old age.”

“ Some people attribute more importance to duty, some to wealth and some to sex. Actually all three are equally important and credible.”

Manu has also stressed clearly that a man should attain Moksha only after he had undertaken the three Ashrams to fulfil duty, attain, wealth and pleasure of sexand has thus got rid himself of three ‘ Rinas’. In case a person not doing so is likely to invite troubles in his path of attaining Moksha. This is an integral approach of life envisaged by Indian ethics.

Equal emphasis on the four Purusharthas is highly essential for a balanced and healthy social life. History has many instances in its record when balance between individual and society was lost owing to undue emphasis on one Purushartha or the other. Excessive emphasis on one aspect of life caused an imbalance in the social life of people. Buddhists, Christians ( St. Paul and Tartulian among them ) and many priests belonging to the medieval Europe put more emphasis on the abstention and it resulted in strong inclination towards immortality.

Similarly “ Vama Margi” Buddhists considered women and wine as an important part of the means. All this led to corruption in the monasteries in Europe and cruelty followed by violence and they became frequent happening.

Indian ethics lays due emphasis on these psychological aspects of human life and so were the Indian seers. Apprehending the possibility of such incidents they put due emphasis on all the Purusharthas equally. Thus the scheme of four Purusharthas make Indian way of life balanced and is devoid of lopsidedness.