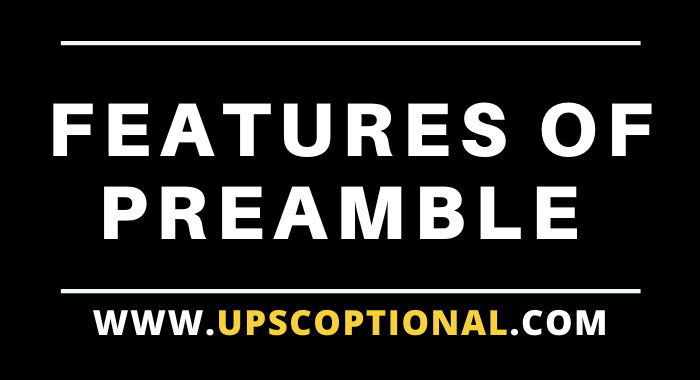 Features, Importance and Nature of Preamble of Indian Constitution for UPSC : –

In this article we will get to all important points in short note format for Preamble. Preamble is very important topic for your exam. Because many MCQ are asked most of the time.

Indian Preamble – Indian preamble is an “Objective Resolution” which has been drafted and moved by Pt. Jawaharlal Nehru on 13 December 1946. But by the 42nd Constitutional Amendment Act SOCIALIST, SECULAR, and INTEGRITY was amended and the date of adoption of preamble is written 26 November 1949. It has been said that preamble was added lastly because the framers of our founding father of constitution thought that it (preamble) should meet our all core principle.

Some facts that our Preamble clear are stated as under –

What is the importance of Preamble of Indian Constitution ?
The importance of Preamble is that it is friend, philosopher to the authority who govern India and to the people residing in its territory. It describe the fundamental values which not only comprises of political value but also moral and religious value. Apart from being the soul of constitution it reflect the dream of good governance ans the aspiration of the founding father of constitution about governance and the role of people towards each other and to have the sense of brotherhood among the community as a whole.

What is the feature of Preamble of Indian Constitution ?

Democracy is classified into two categories :-

i) Direct Democracy :- People are in command of supreme power eg:- Switzerland.
ii) Indirect Democracy :- People use the supreme power and elect there representative who further take part in government and frame policies and law for the betterment of people and the society as a whole so we can say indirect democracy people indirectly take part in government so indirect form of democracy is also termed as representative democracy.

I) Parliamentary Democracy:- In India Parliamentary Democracy is being practiced where executive is responsible legislative for framing of policies and laws . In this type of democracy various unique function exits such as universal adult franchise, time to time election, rule of law, independence of judiciary and no discrimination , above mention all function makes Indian polity a unique one .

II) Presidential Democracy :- In presidential democracy or presidential system president id the head of the state and is irremovable. All the executive power are with him and he is free to choose the head of different department i.e. secretaries or the ministers . This type of democracy is base on the doctrine of separation of power and function between executive , legislative and judiciary .

Democratic form of government can be further classified into two parts : –
a) Monarch
b) Republic

a) Monarch:- In this type of system the power is based on heredity and the king and queen is the head of the state , and further branches of hereditary gets the power automatically. Ex :- Britain

b) Republic:- The head of republic form of governance is directly or indirectly for the fixed period of time and elected by the public and among the public .
In the contest of Indian republic which means the president is elected for the fixed period of time i.e. five years. In this type of system political sovereignty are vested in the hands of public i.e. citizen and every offices are opened to all the citizen of India without any discrimination .

e) JUSTICE:- The idea of justice i.e. social and political has been taken from the Russian revolution of 1917. Justice is further classified into Social justice, Economic justice and Political justice .

i) Social Justice :- Social justice means that there exist no social discrimination to any citizen based on caste , creed color , race or religion . No one is superior or inferior except for the fact that there exist a condition for the welfare of backward class and women

ii) Economic Justice :- Economic equality to all . It include elimination and storage of income or property. The sum of social justice and economic justice is called distributive justice .

iii) Political Justice :- All citizen have equal political rights and have equal access to all political offices and all there voices heard by the government

f) LIBERTY:- The idea of liberty has been taken by the French revolution (1789-1799).
liberty means that there exist no place for restriction on an individual of doing any activity and also on providing equal opportunity for there grown and development of an individual personality. There exist liberty of thought, expression on belief , faith and worship which is also described in the fundamental right part III of the constitution, Justifiable too .
Liberty does not grant the citizen the right to what they feel like but to do all the activity within the limit of constitution.

g) EQUALITY:- Equal treatment to all the citizen of the society which can also be understood by the fact that there will be absence of any privilege to any particular individual , absence of any discrimination on the basis of caste , creed , color , race, or sex . Equality is divided into Civic, Political and Economic

Article that ensure Civic , Political and Economic equality are stated as under:-

Political Equality :-
Article 325 and Article 326 :- No person can be devoid of right from contesting or forming political parties and can take part in lok sabha and state assembly.

h) FRATERNITY :- The sense of brotherhood among all the fellow citizen. Humanity best describes the fraternity . It is the duty of every citizen to promote harmony and the spirit of common brotherhood toward each other and a society as a whole. ( Article 51-A) of Indian constitution best describe the idea of Fraternity to all the sphere of life.