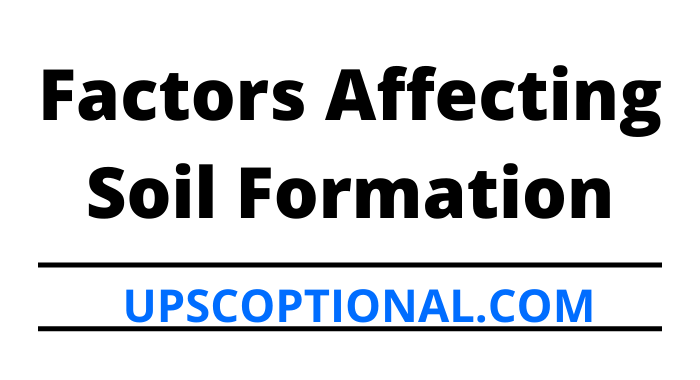 What are the factors responsible for Soil Formation ?

There are five major factors which are responsible Soil Formation :-

1. Nature of parent rock – Black Cotton Soil is one of the finest examples of parent material controlled soil.

2. Climate – The role of climate is to vary the inputs of heat and moisture. Climate affects the rate of weathering of parent rock with the most rapid climate being a hot and humid environment.

3. Topography – Slope and Aspect. – Aspect of a place refers to its position viz – a – viz the sun’s rays. For example – the southern slopes of the Himalayas are sun facing slopes.

4. Biota – Plants and Animals. ( both living and nonliving ) – Alluvial soil which is a transported soil lacks humus in general ( except Ganga – Brahmaputra delta of Sundarban region ). Since alluvial soil lacks humification, therefore it also lacks nitrogen. This explains the wide use of nitrogenous fertilizer in north Indian plains. Alluvial soils are very efficient in fixing N2 from the atmosphere if leguminous plants are grown in them. Leguminous plants like peas / beans / cloves have root nodules which contain N2 fixing bacteria.

5. Time ( in undisturbed condition ) – Alluvial soil which is a transported soil does not have good soil profile development as it lacks time in undisturbed condition. It is on continuous move from Himalayas to plains and in plains it has been in continuous use since Indus Valley Civilization. Despite lack of soil profile development, alluvial soil is very fertile as it gets replenished by river every time. Time is a passive factor in soil formation. Climate in general is the most important factor of soil formation.

FAQ : –
1. How do organisms affect soil formation ?
Ans – Soil organisms helps in degradation of organic matter and thus helps in formation of soil humus. This increases the fertility of soil.

2. Is soil texture a factor of soil formation ?

Ans – Soil texture is not a factor of soil formation.

3. Which factors lead to soil degradation ?

Ans – Soil degradation is the serious environmental problem. Deforestation and indiscriminate use of chemical fertilizers and pesticides lead to soil degradation.

9. How does red soil develop its red colour ?

Ans – Because of diffusion of iron in crystalline and metamorphic rocks.