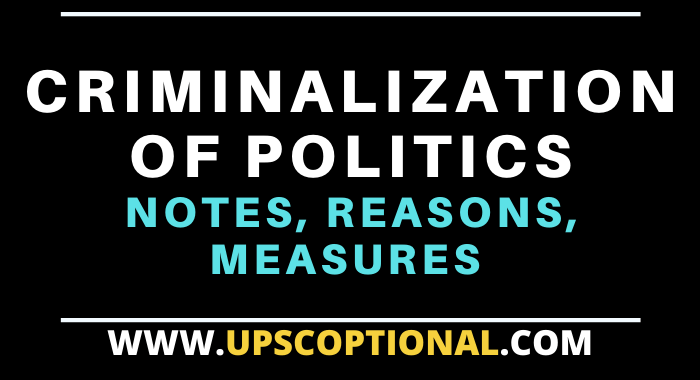 What is the meaning of Criminalization of Politics ?

It means, the anti social elements entering the electoral contest and getting elected to legislature. It takes place primarily because of nexus that exists between criminals and certain politicians in which politicians extend protection to criminal activities of antisocial elements and the criminals extend money and muscle power to the politicians to win election.

In order to increase their chances of getting their candidates elected to legislature, the political parties nominate criminals to contest election leading to criminalisation of politics.

Why Criminalization of Politics still continues ?

1. The criminal justice system has inbuilt delays which are exploited by the criminals. By going on appeal to high court against a conviction in a trial court where the high court suspends his conviction and suspension both. The convicted person becomes innocent in the eye of law and he is allowed to contest election.

2. The rate of conviction in India has been going down which means many persons who are accused of crime may actually go unpunished in a court of law and they cannot be disqualified from contesting elections.

3. The first-past-the-post electoral system which is followed in the Lok Sabha and Legislative Assembly elections which is based on the basis of getting largest number of valid votes polled in the election. This allows the candidate to get elected into the legislature mearly polling 25 to 30% of the valid votes which a criminal funds to obtain by using his money and muscle power. Thus first-past-the-post does not discourage the criminal from contesting the election.

4. The parliament has failed to enact adequate electoral reforms to decriminalize politics.

What are the impact of Criminalization of Politics ?

1. The worst consequence is that law breakers get elected as law maker. The legislature loose their moral authority to enact laws and they also loose credibility and effectiveness in enacting necessary laws on time for effective administration of the country.

2. Criminalisation of Politics, which relies heavily on money and muscle power also leads to circulation of large amount of black money during and after elections diluting the probity in public. Further it also introduced in the culture of violence in the society and sets a bad precedence for the youth to follow.

3. The state institution like judiciary, executive, legislators, bureaucracy, etc become weak and the administration of the country suffers.

How to stop Criminalization of Politics in India ?

What are the measures undertaken to curb Criminalization of Politics ?

There are mainly two types of measures that have been taken, namely Judicial Measures and Election Commission’s of India Measures.

1. The Supreme Court in the Union of India Vs Association of Democratic Reforms 2002 held that citizen under Article 19 ( 1 ) ( a ) enjoyed the right to make informed choices. Therefore it declared election commission to get all contesting candidates to declare at the time of filling their nomination – the asset and liability, educational qualification, criminal activities and pending criminal cases if any in a court of law. This is to bring transparency in the electoral system.

2. In Ramesh Dalal 2005 case, the Supreme Court held that even the member of state legislature shall be disqualified from contesting election if on the day of filling his nomination papers he stands convicted and sentenced to not less than 2 years of imprisonment.

3. In 1997, the Supreme Court directed all the High Courts not to suspend the person on appeal if he is convicted and sentenced by a trial court under Prevention of Corruption Act 1988.

4. In Lily Thomas Vs Union Of India 2013 case, the Supreme Court stated that section 8 ( 4 ) of Representation of People Act , which provided that disqualification of MLA shall take effect after 90 days after his conviction as unconstitutional and void on the ground that Article 102 ( 1 ) and Article 191 ( 1 )  provide for disqualification and the MPs and MLAs where such disqualification for being member of House is automatic and with immediate effect.

5. In PUCL Vs Union of India 2013 case, the Supreme Court held that citizens under article 19 ( 1 ) ( a ) enjoyed the right to negative vote and directed election commission to include NOTA option for voters to reject all the contesting candidates.

6. In PIF Vs Union of India 2014 case, the Supreme Court directed all the trial courts to complete a trial of a case within one year after framing criminal charges if the trial is against the member of a legislature.

[ B ] Election Commission of India’s Measures : –

1. In August 1997, the election commission directed all the returning officer to reject the nomination papers of any candidate if on the day of filling the nomination paper, he stands convicted in a court of law even if his sentence is suspended by a court.

2. The Election Commission has made following recommendation to be passed into law by the Parliament : –

a ) If a person is accused of a serious crime and if a court has prima facie has framed criminal charges against him he shall be disqualified from contesting elections. However, in order to prevent the ruling party from misusing the provision it shall be provided that only those cases that are filled 6 months before the holding of the election lead to disqualification.

The Law Commission of India and National Commission to review the working of Constitution have made similar recommendations but only if the cases are filed atleast 1 year before the holding of election.

b ) If a person is found guilty of a crime by a commission of enquiry he shall also be disqualified from contesting elections.

c ) The two ballot electorate system shall be introduced in place of first-past-the-post electoral system for holding election of Lok Sabha and Legislative Assembly. For this system a candidate is declared elected from a constituency only if he obtains more than 50% of valid votes polled. In a multi cornered contest if no candidate obtains the majority of votes then the 2 candidates who obtains the largest number of votes shall be allowed to contest in 2nd round of election where one of them must be able to get elected. This will discourage the criminals from contesting elections.

d ) Along with 2 ballot system the right to reject should be introduced in favour of voters. Under this system an elector can reject all the candidates and such a ballot shall not be regarded as invalid. It will continue to be valid votes. This will further make task of criminal difficult to get elected.

e ) At present section 125 ( 1 ) of Representation of Peoples Act 1951, prescribes a maximum punishment of 6 months for filling false information at the time of contesting election. The Election Commission wants this sentence to be increased to atleast 2 years so that a person can not only be disqualified from being the members of the House, if elected but also disqualified from contesting election.