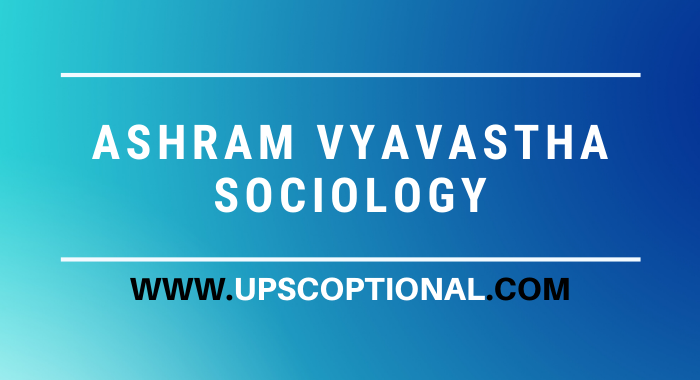 Examine the sociological importance of the Ashram Vyavastha.

Discuss the importance of Ashram Vyavastha in Hindu social life.

Describe the role of the Ashram System in Hindu social life.

Give a critical estimate of Ashram System.

Integrated Approach – Ashram System is indicative of an integral approach to human life. By it a complete development of human power – physical, mental and spiritual takes place and their proper satisfaction leads to an integral development of man. It maintains the balance of social and individual development. It is the most unique system in human social history and has eternal value. The Ashram system was prescribed for the achievements of the values included in the concept of Purusharthas. The idea of Purusharthas is the fundamental principle of Indian social ethics. According to it, the aim of every person in the world is to attain the four Purusharthas – Dharma, Artha, Kama and Moksha.

Connected to Rinas – The system of Ashramas was also closely connected to the concept of Rinas. Three types of debts have been enumerated in the Satpatha Brahaman :

Debt to parents is the highest because they look after a person in his infancy, suffering much pain themselves in the process. According to the Indian commentators – “The way of repaying parental debts is to have children oneself and look after them in the same way.”

Growth of Integrated man – The Ashrama System aimed at the establishment of an order in which different aspects of man’s personality may achieve satisfaction, growth and evaluation. It is generally accepted that the main urges of men are biological and innate. Freud called it ‘ID’ while other psychologists have given it different names but did not refuse to accept it. Similarly, the social aspect of personality called ego by Freud, had been also generally accepted. The socialization of self or ego leads to a further bifurcation known as superego in Freudian terms. This superego carries on the mechanism of social control.

Value of Brahmacharya Ashrama – This stage of life corresponding to Brahmacharya ashram is a stage involving all types of physical and mental growth. Therefore the chief aim of this stage of life are study, physical development and fulfilment of Dharma. The Indian thinkers never accepted a philosophy of Laissez Faire in human life, because they were convinced that whether in cosmos or in human life there is a law of causation based upon certain external principles.

Therefore, the authors of Dharmasastras decided that the males and females should devote all their energies to physical and mental development upto the age of 25 years, ignorant of the world around them.

Some western thinkers have recently laid a strong emphasis on sex education. But the Indian thinkers were determined to accept its necessity during the period of celibacy. Therefore the prescriptions of the Brahmacharya Ashram based upon physiological and sociological facts.

Values of Vanaspratha and Sanyasa – The most significant contribution made by Indian thinkers to the world of human knowledge is about the rules of metal hygiene of different stages of life. The Vanaprastha Ashrama prescribes remedies to the problems of old age and even death. In the entire psychological wisdom gathered by humanity in East and West, there is no parallel to the concept of Vanaprastha Ashrama so far as the challenges of old age are concerned.

While youth considered the stage of enjoyment, old age in India was considered the age of renunciation and liberation. The Vanaprasthi used to roam from village to village, forest to forest, not staying at one place for a long time. This was the stage of the final liberation in sanyas ashram. And it was provided a period equal to any other a whole span of 25 years so that there may be a complete mental and physical transformation of the human individual. It was so because the spiritual values have been given the highest status in Indian Dharmashastras.

Therefore H. H Allport has rightly pointed out that Hindu psychology is much more mature and integrated as compared to modern western psychology while the later has made significant breakthrough about the matters concerning childhood and youth. It has only touched the surface of the problem of old age.

Thus the Ashram System avoids both the extremes of unrestrained enjoyments and unprincipled asceticism – the two extremes which have plagued human cultures everywhere and had been the major cause of their degeneration and death. This is again the secret of longevity and vitality of Indian culture. The Ashrama system is the general form or structure of the actual functioning of the social institutions in Indian society. It was the principles of order and harmony in individual and social life.